Kids can be mean, we all know this and have probably all both been a) the subject of a kid’s meanness and b) one of the kids being mean at some point in our lives.

Let me tell you the sad tale of the day I was subject to the meanness of other kids and shamed for asking for a hula-hoop. For those of you that aren’t British or are otherwise unfamiliar with the snack, hula-hoops are a kind of crisp, they are little potato rings you can fit on your fingers, so both fun and edible!

First things first, you need to understand that I have always liked my food. I’ve also never been a fussy eater and like to try most things, there is perhaps a handful of foods I don’t really like but even those I can eat if the occasion calls for it and it would be rude to decline (if you are wondering these include: fruit cake, normal trifle, marzipan and horseradish).

I come from a family that likes food and would rush to eat our dinners first in the hopes of being first in line for second helpings of whatever was on offer. Trying to distract family members at dinner-time so that you could steal what was on their plates was quite routine. But woe and behold if you got caught stealing someone else’s grub!

Once when I came home late after some activity my parents were out, but my brothers were there to ‘look after’ me. As I sat down to eat my reheated dinner my brothers sat either side of me and the eldest would sneakily take a piece of pasta from one side and as I turned to him in a rage my middle-older brother took a piece from the other side. Doubly mad at the middle-older brother, for joining in the food theft game and for copying the eldest brother in doing so, I stuck a fork in his head. Don’t worry I didn’t commit fratricide at an early age, I didn’t even draw blood, I did teach both of my brothers a valuable lesson and neither has stolen food from me since, or at least not that I know of.

Please don’t take this as an indictment of my parents, we weren’t squabbling over food because there wasn’t enough to go round, or we only got fed once a week and were left to fend for ourselves from scraps elsewhere for the other 6 days of the week. We were just a family who liked to eat.

As I do with almost everything, I tend to assume that everyone else is just like me until confronted with evidence to the contrary. Therefore I assumed it was perfectly normal to show a healthy love of all things edible and to try to get as much as possible. 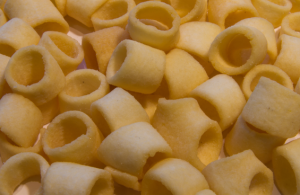 The Hula-hoop incident must have happened when I was about nine or ten. This was before, or perhaps the start of when, I became conscious of body image, a desire to look like girls in SmashHits! Magazine and a realization that being yourself can at times be dangerous.

We were eating lunch indoors and I went to the bathroom, when I returned one of the girls, let’s call her Tanya although that’s not her name, opened up a bag of salt and vinegar hula-hoops and one of the other girls around the able asked if they could have one, quickly followed by another girl and then another. When everyone else had asked for a hula-hoop I naïvely asked if I, too, could have a hula hoop? At which point all the other girls, I think there were eight of us around the table, burst out laughing!

It turned out people, or Tanya at any rate, had noticed that I had a habit of asking to try other people’s crisps and they thought it would be amusing to lure me into a false sense of security by following their lead in asking for a crisp, before cruelly pushing me into their devil pit of mockery!

There’s really nothing worse than having other people point out to you habits that you had, up until that point, been blissfully unaware of, but are now unable to forget. Since that day I never ask anyone, with very few exceptions, if I can try their food. If people voluntarily offer me their food I go into automatic child survival mode, sense a trap, and will usually decline at least once or wait to see how others respond before I judge whether or not I can indulge myself without fear of ridicule.

Probably none of those girls remember their lunchtime prank. It wasn’t exactly the worst thing kids have ever done, and undoubtedly I’ve indulged in worse to others, and they probably weren’t aware of the effect it had on me. But that was the first time I felt shamed for my eating habits and became conscious that certain behaviours, i.e. showing an appreciation of food, were not okay. Worst of all though I never even got to eat that bloody Hula Hoop!