It’s really boring watching someone play on a smart phone when you want to engage with them. I was trying to be careful not to use my phone around her too much. At meal times phones are banned for everyone but it’s too easy to pick it up for a quick check of messages, flick through twitter, instragram updates etc. and I’ve got increasingly worse at this recently. Or I did until I was sat next to my daughter in her playpen she reached up and grabbed my phone and then spent 20 minutes playing with it. I tried to engage her in activities we could both do but it was too late she was lost to the machine. Well played, baby, well played.

Lack of sleep was one of the things I feared before my daughter was born. I focused on this because there were other things I feared that I couldn’t possibly know how they would work out, I did, however, already know that I can be a bit of a grouch when I’m tired. It’s certainly not been a piece of cake adapting and I do have a new found love of caffeine, but it’s also not been so terrible. Now we are at a point when the little one (mostly) sleeps through the night and I’m grateful for that, all the more so when the blooming cats don’t decide I should wake up at 5am and feed them!

I’m starting to miss those before child (BC) lie-ins less and less, I quite like being up and about, having already done a trip to the park or market or whatever, and ready for lunch before I’d even have gotten up in my child-free days.

3. Enjoy the gifts you are given

Mostly playing with my daughter is an exercise in she wants everything at once, so if I pick up a toy she wants it, if I pick up another one she wants that too until before I know it she is resembling Smaug sitting a top a hoard of treasure that no-one else can touch. Recently though there has become an element of shared interaction in her play, so it may be that I will shake the egg shaker, she will take it to shake and then will give it back to me.

With food we are fortunate that so far our baby is a pretty enthusiastic eater, she happily and readily eats most stuff we give her. In the last few weeks she has decided that it is quite entertaining to occasionally try to feed us and it is genuinely delightful to eat half-chewed up apricot because my daughter wants to share it with me even if she sometimes changes her mind and then tries to pluck said apricot from my mouth. 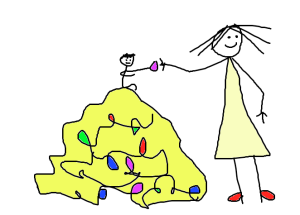 4. You can always be wiped down and change later

The only way to eat watermelon is to squish it in your hands, let the juice run down your elbows and mush it into your face, you can always be wiped down and, if needs be, changed later. Sometimes life just needs to be grabbed in both hands with big squidgy fistfuls and crammed in to maximize enjoyment. Sure you might get a bit messy along the way but don’t let a bit of potential stickiness put you off from really just giving into the good stuff from time-to-time.

5. Take time to stop and stare

Seeing my child stare in wonder at the everyday things I used to take for granted has caused me to take time to stop and stare too.

Wriggling your fingers is fascinating. How do they work? What makes them do that? How is it I think to move them and they move?

Recently I was showing the teeny one rain during a storm, telling her how it comes down from the sky and why it is important to make the plants grow. We were in the dry from our covered balcony area and I stretched out my hand to try and catch a rain drop, then my little girl unfurled her hand and as she felt a drop of water looked at me in surprise. There is a lot to be amazed at in the every day and her wonderment is contagious.

6. Holidays can be a time to relax

BC I saw holidays as an opportunity to cram in as much stuff as humanly possible to make the most of visiting a place I assumed I’d never return to because when there is so much world to see why waste time returning to places you’ve been before? When I got preggers we did a couple of trips when I had to start to slow down because rushing about just wasn’t possible. We’ve travelled quite a lot with the little one and, although a lot of that entails somewhat manic dashes around the UK trying to absorb as much time with friends and family as possible, we have also managed a couple of actual holidays too.

My approach to these has changed racially, now I think that managing to do a couple of things that I couldn’t do at home and spending the rest of time relaxing in nice surroundings is pretty great. A gently foray here and there is more than enough and returning to places in the future doesn’t seem like such a terrible idea. Consequently holidays are now much more relaxing and rejuvenating.

7. Sources of amusement are all around

Mummy jumping is entertaining. Daddy moving you in and out of view of your reflection in the mirror is worth a throaty chuckle. Cats standing up to take treats are hilarious. Life doesn’t need to be taken seriously all the time and there’s a lot to laugh about.

8. Communication is more than words

I sat eating some toast and the little one came up to me at the edge of her playpen, pointed at my toast and then at her mouth. No need for words there, the message was pretty clear. I didn’t share with her my toast but did give her some watermelon so we could snack together.

There are so many ways to communicate without language but not being able to rely on words really brings this home. Most importantly I can communicate that I love my girl without her needing a grasp of words to understand this.

My daughter’s patience and willingness to try to learn and master new things like trying to form words, eat without help and stand up and walk is really inspiring. Even though she gets tongue tied, covered in gloop and falls down over and over again, and sometimes there may be a bopped head and tears involved, she doesn’t allow her failures to put her off. Her patience and willingness to keep practicing is really inspiring so I’m trying not to use my frustrations with language to prevent my from practicing and improving my French, if she can do it so can I.

10. My capacity to love is limitless

For a long time before my daughter arrived, long before she was even a remote possibility, I had worried I may be too selfish to be a mother, to really be able to put someone else’s needs before my own on a constant and consistent basis. I’m not a selfish monster, I’m quite capable of putting others first from time to time but the idea of putting my needs as secondary to someone else’s on a systematic basis just sounded implausible. Sure I could quite happily sit several hours longer than planned to if my cat sat on my lap and didn’t want to be moved, but I could also shoot that same cat in the face with a water pistol when they decide to bang on my wardrobe doors for the umpteenth time in the early hours of the morning.

When my child was born those fears disappeared and I learnt that love doesn’t come in limited quantities that you have to balance against competing needs and priorities. I can still love myself, my husband, cats, friends and family and love my baby without any of those losing out in the equation. And my capacity to love grows every days as I love my child more and more deeply the more time I spend with her and better I get to know her.