You may be familiar with the phenomenon that is resting bitch face, whereby a certain number of females and males too (let’s not discriminate) are prone to the condition of a face that, when left to it’s own devices, expresses the wrath of an inner demon that thrives on kicking kittens, making their friends pay for everything and insulting disabled people.

This is no reflection on the owner of said face, as more often than not they are unaware of this portentous façade, which is why the evidence is only ever seen when the person is at rest and is not responding to the people around them.

Some say this may be a survival tactic that has evolved over hundreds of years to send a clear signal to anyone, that might want to engage in some light hearted chit-chat with a stranger, that this stranger would actually rather be left alone with their own thoughts/book/electronic gizmo/etc.

Some say this condition is actually symptomatic of those inner demons that reside within all of us and are merely pretending to be human whilst waiting for the moment to exorcise themselves of their host and take over the world.

Some say that as it takes more muscles to frown than to smile then resting bitch face is just a subconscious facial workout.

Whatever the reason behind the act, at least the condition has gained worldwide recognition. What may be less commonly known to you is the phenomenon that is resting bike face. It has come to my awareness that this is something that afflicts me.

From a distance on my bicycle I probably look like any other cyclist, well possibly slightly slower, more out of breath and marginally sweatier than other cyclists but you get the idea. However, if you were to take a nice photo of me cycling past and then zoom in on my precise facial expression you would notice that in fact my resting bike face is no laughing condition.

Unlike resting bitch face my facial expression whilst cycling does not so much suggest to the world that I am better left alone, so much as ‘if you don’t get out of my way I may actually bite off a limb and pick my teeth with your bones.’

Even though I am now conscious of the fact that my face has a tendency to scrunch up into something resembling a snarling paper ball I am still unable to stop the problem. 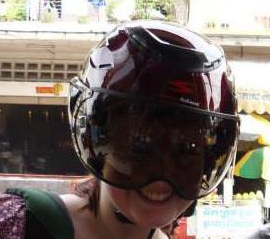 I am probably more conscious of the issue since my Cambodian bike helmet, complete with snazzy visor, broke, thus leaving much more of my face exposed to the world than previously. Perhaps my face is just reacting badly to the removal of that flimsy plastic piece of social distance that used to be affixed to my head?

I have noticed that my resting bike grimace is intensified with the addition of the vacant gaze a dead fish would be proud of when cycling uphill becomes even less enjoyable than normal, with, say, the addition of a light snowy breeze blowing into my face or leg muscles that are valiantly trying not to crumble after I’ve overdone it at the gym and then decided to cycle home (in my head it makes a lot more sense).

Although at least under these conditions that zombie dead-eyed ravenous expression would probably make more sense to the average passer by than under pleasanter cycling conditions.

Whilst I am unable to control my two wheeled riding expression I am reasonably sure I don’t actually want to tear your head off with my teeth, but as this theory is untested it maybe best to stay out of my way if you see me pootling toward your, just to be on the safe side.

This wont be a problem as I tend to pedal at the pace of a sloth who has already put in their day’s work just by waking up in the morning, but you have been warned!