I am a fat pregnant person. I do not mean that I feel fat because I am pregnant, I mean I was fat to begin with and now I am pregnant, but I am still fat.

I have been trying to reclaim the word ‘fat’ since reading Sarai Walker’s marvellous ‘Dietland’ (which I sincerely recommend to any woman trying to accept they don’t fit into the beauty moulds society suggest we should aim for and which the majority, non-fatties included, are ultimately doomed to fail to achieve). More recently I read Chimamanda Ngozi Adichie’s highly-rated, and deservedly-so, ‘Americannah’, and marvelled along with the protagonist at the offence the word ‘fat’ causes in Western societies, rather than being taken simply as a descriptive term that could be applied without judgement in the same way you might say someone was tall.

Pre-pregnancy, I was doing pretty well at mostly accepting my chubbiness, excepting occasional hormonal ups and downs. I knew I ate too much, but as the overeating tended to be of relatively wholesome homemade foods and was always accompanied by a level of fitness that was satisfactory (to me at any rate), rather than the result of constant consumption of junk food and an inability to remove myself from the sofa this didn’t seem so terrible.

Pregnancy has been a different story. For most of the first trimester I felt so nauseous healthier preferences were thrown out for tortilla chips and rounds of marmite toast in a challenge to eat anything. I gave up the gym and stopped running because almost any form of motion was sickening.

Then along came the Christmas holidays, a typical period for over-indulging where constant rounds of friend and family reunions involved more cheese and chocolate than I could fit in my carry-on luggage, let alone stomach. However, this year I couldn’t throw myself into a healthy, if depressing, January of salads and doubling the gym attendance. At least I wasn’t drinking but that was as far as it went as the nausea and extreme fatigue continued to hammer me.

The normal holiday bloating and the beginning of those changes in my pregnant body added up to a horror of my corporeal shape that was unprecedented. I was hitting the scales at figures higher than I could previously recall and saw no means of escaping this. The bearded one told me he could tell it was a pregnant body but I remained unconvinced and was at any rate aware nobody else would know this, as we still hadn’t told anyone at this stage.

When we did finally tell people we were pregnant I enjoyed people telling me I could now enjoy ‘eating for two.’ However, I also knew there was no truth in this and wanted to make sure I was getting the kind of balanced diet a growing spud might need.

People asked me if I had any cravings and I was pleased to report that I didn’t, assuming that my lack of cravings meant the growing bambino was getting all the nutritional requirements it needed from my diet, even if it was also getting a bit more than strictly required.

In recent months, as my bump has become more obvious, I have been happier with my new rotundness, which was cemented when one afternoon a colleague told me that I was looking beautiful in my pregnant state and I actually believed her.

I started delightedly calling myself ‘fatty’ with a new-found glee, finally believing I had found peace with the term. My increased girth is mostly down to the potato growing inside me but my pregnancy doesn’t mask the fact that I was and continued to be overweight.

It amused me how my liberal self-application of this most derided of descriptive labels made so many other people uncomfortable. As the thought of being considered fat is, in the minds of most, a truly terrible thing and, even if it happens to be true in my case, most people probably thought it was a kindness to try to hide this truth from me. I thought it was a kindness I no longer needed and that I was now insulated both emotionally, and with that extra layer of blubber quite literally, from being worried about my body shape. It felt liberating.

It turns out I was mistaken and my feelings are as squishy as my current body-shape, which I discovered when our doctor, at our most recent appointment, brutally exposed me to the truth that I was too fat for a fat pregnant person. For all my attempts at loving my inner fatty, it turned out, that when cruelly exposed to the reality, I actually wasn’t as happy with the idea of being judged a chubster as I had previously thought.

In my first appointment with the doc I had quickly self-acknowledged that I was overweight so as to avoid the medical man feeling the need to point this out to me in the mistaken belief I might not already know, but at that point he seemed unconcerned.

As a fat pregnant person I had diligently searched the web to discover how much weight I should be aiming to put on each week and was alarmed at each doctor’s appointment how rapidly I was piling on the pounds, conscious that the scales were escalating more rapidly than was probably required. I also considered that the nutritional advice these sites were dishing out wasn’t aimed at the likes of me as they would tell women that if they felt truly naughty and gave into the occasional chocolate chip cookie not to berate themselves too much. I knew the occasional cookie would never be my problem; I was in much greater danger from falling prey to an entire packet of Oreos – so considered the advice was meant for others.

Nevertheless, each weigh-in over the last five months or so I expected the doctor to raise my weight gain as problematic but as he failed to do so, despite numerous opportunities, I started to relax into a false sense of security. I assumed that a little extra on top of the ideal weight gain was nothing to worry about. I also thought it was perhaps okay to cut myself some slack, given the trials my body was undergoing and the inability to keep up with an exercise regime a non-pregnant me would be proud of.

So, it had been 5 weeks since our previous appointment, the longest we had been without having to see him so far, and during this time it had been my birthday, I’d been to Paris and back to the UK, seen friends and family and clearly indulged a little more than usual. However, given my new complacency and self-acceptance of the extra bumpy version of Briony, it was a shock as I weighed myself to hear the doctor tell me that I had gained ‘a lot’ of weight and then for him to cheerily follow-up with ‘I tell my patients that weight gain is my problem if it is accompanied by gestational diabetes,’ (which they will be testing me for soon), before continuing, ‘but if there is no diabetes then it is their problem as they will have to lose the weight afterwards.’

The fact that he was a man who would never experience pregnancy first hand suddenly seemed very apparent and more of an issue than it had ever seemed previously. I wanted to explain that I’m not fat on purpose, that I know I eat too much but ‘simply’ not doing so is as challenging for people like me, who struggle in the willpower department, as I imagine it is for smokers to ‘simply’ quit.

That my normal approach of trying to balance my overeating with increased exercise was not an option when I can now rarely walk for more than 20 minutes without needing a rest, let alone stomp for hours or run. That I am tired and vulnerable in my first pregnancy. That I would rather have someone gently ease into concerns of rapid weight gain rather than smash me over the head with it.

It didn’t help that I am now at a point where with hormones surging, increasing discomfort and troubled sleep my tolerance is lower than normal. However, I managed not to respond as I wanted to, which would have involved swear words and physical violence, but simply smiled grimly.

To top it all off he then proceeded to spend the rest of the appointment calling me by my middle name. With every utterance of a name I don’t recognise as my own, my internal pressure gauge rose.

I’m not sure whether police would have understood if I’d snapped and hit him over the head with the coat stand but it’s probably as well we didn’t have to find out. The doctor may have undergone years of medical training and clearly knows more about pregnancy than me, but he evidently hasn’t watched enough David Attenborough shows. Otherwise he’d have known that Hippos are the most aggressive animal on the planet and would have thought better than to goad one in the confined space of his office.

I managed to leave without harming anyone or anything, and as we headed into the wet Geneva evening to meet some friends, the bearded one eased my mood by buying me some new trainers, which I can wear happily in the knowledge that whatever the scales might say he’ll love me and the potato regardless. They are also a nice shade of gray that will remind me of those mud-loving monstrous beasts and the threat they can pose to those around them. I’ll be sure to wear them to my next appointment. 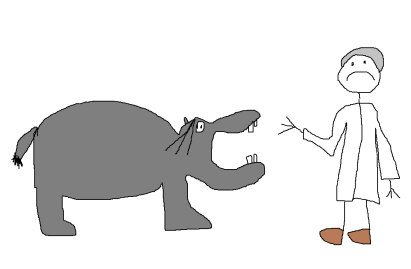 2 thoughts on “The Pregnancy Diaries: Hippos Can be Very Aggressive”