WARNING: if you are a passionate bird lover to the extent that hearing about bad things happening to birds might set you off on an ornithological-loving-grief-fuelled-murderous-rage, then you should probably skip this post!

I’m afraid I must confess the sordid truth that I am harbouring in my flat a serial killer. In a two-week period Jasper, the infinitely smarter of our two cats, managed to kill not one, not two, not even three, but six birds. Six!

Or rather, he managed to kill six birds that we know about, our neighbor mentioned seeing Jasper mid-kill at some point but I’m not sure if that’s an additional one for the tally or part of the collection he’s already paraded in for our inspection. I fear the six corpses we know about may just be the tip of a very bloody ice-berg.

Before we convict and condemn my four-legged felon I would like to say, in Jasper’s defence, the six birds in two weeks is also six birds in the last six months, as prior to this particular killing spree he hadn’t bought us any murderous trophies for quite some time.

Now I don’t want to diminish Jasper’s hunting prowess, clearly the little bastard is not one to let the opportunity to kill some little mite pass him by. And actually his ability to trap and kill flies and other annoying insects is something I’m quite happy about. The more mosquitoes he can kill, the less there are to bite me and the more daddy long-legs he can take out, the less there are of those little dangly-legged freaks to get up in my face!

However, whilst Jasper does have the speed and agility to aid his lethal ways he does lack the camouflage. Being a bright white cat with black spots should hamper his murderous abilities somewhat and, on a normal day, any sensible bird will see him coming a mile off and know to get the heck out of there.

So, whilst I’m not in favour of victim-blaming and clearly I don’t think the birds deserved to die, I do think the birds should take a little responsibility for the untimely deaths that have been decimating their local population.

The problem is these birds are so busy preening and parading and shaking a tail feather to impress the lady birds that they often fail to spot their five pound, white fur-encased harbinger of doom not so very subtly sneaking up on them. 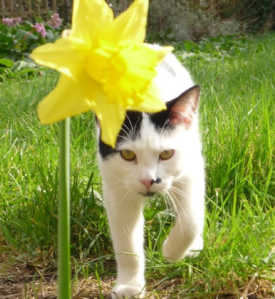 Really Jasper is just participating in natural selection and aiding the evolution of the Sparrow by removing from the mating pool those birds thick enough not to shift it when he’s on the prowl. Perhaps the lady birds sat up in the trees are fully aware of Jasper’s ornithocidal intent and are just happy to sit back and let him weed out the unobservant of their species that think they are hot stuff enough to make it into their lady nests.

I don’t dislike birds and I would rather my cat didn’t kill so many, or at least that I didn’t know he killed so many, but perhaps blinded by my catty love I’m usually pretty good at making excuses for him when he does. To him it’s just his natural instinct to take the birds down and it’s a really fun game at the same time.

I also liked to pacify myself with the thought that he at least finishes them off quickly so that the amount of suffering is limited. But recently, when I woke to the sound of protracted murder, I have had to reappraise that thought.

It may be true that natural sounding alarm clocks like waterfalls or birds tweeting are a much pleasanter way to wake up than an obviously electronic beep. Let me assure you the same is not true of the very natural sound of a bird screaming out the last agonies of its life as my cat joyfully ends its days.

Waking up to the sound of the screeching bird and finding Jasper dragging the poor little bleeder around the flat was definitely not the best start to my morning. Sometimes the human intervention can make a difference. Occasionally we do manage to rescue a critter from the cats, we’ve managed to save a couple of mice from Buttons in the past, who managed to run off into the undergrowth so I can only assume went on to live full and happy lives.

But in this instance I knew there was nothing I could do to save the savaged bird so I did the decent thing… and chased Jasper outside where he could finish the bird off. Rather him than me.*

The killing does seem to have slowed down for the time being so hopefully the mating has passed and birds are once again more concerned about the end of their days than getting their end away. Or maybe Jasper is just stashing the bodies somewhere yet to be discovered…

*My fiancé has had to finish off our cats leftovers on more than one occasion and I’m profoundly thankful that he is in my life and able to spare me from these particular horrors!

3 thoughts on “Waking up to the sound of murder”