I recently read an interesting post ‘In Defence of Aging’, which has got me thinking about that age-old question, which is really two questions: 1) Am I getting old? And 2) Do I care?

Age is a funny thing and the perception of old-age is a fairly fluid construct, in that the closer you get to it the further it moves away.

When I was five and the 1990 World Cup was taking place I remember my dad telling me that the next World Cup would be in four years time. To my five-year old brain four years might as well be the end of the world. And from a five-year old’s perspective, when one year is a fifth of your life, then four years is a lifetime.

If we compare that to now, when the 2014 World Cup finished with yet another disappointment for England (and to be fair every other team that wasn’t Germany), my perception is slightly different. It’s only another four years to the next World Cup, barely a wait at all and only a fraction of the life I’ve already lived.

At the age of 10, 50 sounds ancient. At 20 the gap between youth and old age both narrows and widens. 30 sounds terrifyingly old but at the same time 60, which used to turn people into Old Age Pensioners, doesn’t seem nearly so old now that we’ve seen parents and friends surpass that particularly year without curling up into a useless mass of pointless existence.

My grandma is 93 but she has only just accepted that she might be old and only a few months ago she threatened to kick anyone that dared to suggest she seemed to be doing very well for her age. ‘What do they mean,’ she’d indignantly ask ‘at my age?’ 93 does seem pretty old but perhaps when, if, I’m in my 80s I’ll probably be thinking ‘90 isn’t old but 100+, now that is old’.

Am I getting old?

So next year I’ll be 30 and with this upcoming change of decade I’m not entirely sure whether I ought to be feeling:

I think feeling old is something we put upon ourselves. Last year, when I was in Cambodia doing an internship I was conscious of the fact that the other interns were all younger than me but it really didn’t matter. My being a few years older didn’t mean we had nothing in common and couldn’t relate. In fact, one of the people I was closest too was one of the youngest of the group but we connected as people not as age-brackets and no segregation of years (or geography for that matter) affects our continuing friendship.

Currently, I don’t feel old but I don’t feel particularly young either and actually that’s okay. I’m a lot more confident now than I was in my early 20s and care a lot less about what other’s think so I don’t really want to go back to that more anxious, albeit slightly younger, version of me. 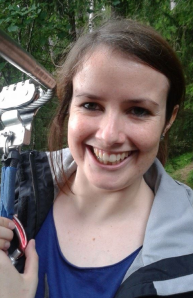 Here is a picture of me taken up a tree during the rope course adventure I tried recently and at first glance, I thought that’s a nice picture (judgement criteria being: I don’t look fat or overly shiny). On closer inspection I note the laughter lines around my hair and a few grey hairs wisping around my head. Does this proof of aging make it less of a nice picture? Again, it depends on your perspective.

What I liked in the defence of aging post, referred to above, was the idea that the lines on our faces don’t so much add character as show our character. I love that the lines around our eyes are called laughter lines because that’s such a friendly non-threatening concept. Yes, I have quite a lot of laughter lines but I’ve spent a lot of my life laughing and as they show up most when I’m grinning away is it such a big deal for other people to see them? Not really. Yes, I have grey hairs now and every so often I will dye these, but does existence of these prove I’m past my sell-by-date?

We recently had vast amounts of ‘expired’ chocolate donated to our office. It still tastes great, and even the resident Belgian (by birth a chocolate connoisseur) agrees. So I might be old in the eyes of some but that doesn’t mean I’m actually past-it.

I was filling in a form at work recently with a colleague who misheard when I gave my date of birth and wrote 1995 rather than 1985. I laughed and expressed thanks for making me 10 years younger and then I instantly took that back because I realized I don’t actually want to be 19 any more. On the whole I’m reasonably happy with how I lived the last 10 years and the 19 before that, for that matter. I don’t want to be 19 again and I don’t really want to look 19 again.

There’s a poem I like, written by someone who set himself the challenge of writing a poem a day, on the topic ‘If I could do it all over.’ The subject of the poem reflects on the ups and downs of his life and decides that if he had the chance to live his life again he wouldn’t change a thing because then he wouldn’t be the person he is today. If I were offered the chance to relive my life and return to my ‘youth’ I think I’d rather stick where I am as I am grey hairs and all!

I’m not saying I’ll happily accept the continued greying of my hair and wrinkling of my skin but I am going to try not to worry about it. It’s part of who I am, evidence of who I’ve been and evolution of the person I will become. And aging is definitely better than the alternative.

Getting older is inevitable but if getting old is a state of mind and my mind is willing to show flexibility in this area then I don’t seen any reason to have to feel old any time soon or, actually, ever.

* Granted the fear I haven’t done enough with my life is going to affect me, but that’s because this is something I’m already worried about, have been worried about since leaving University and will probably continue to worry about in the future. That’s pretty much what this whole blog is about.

2 thoughts on “The age-old question”